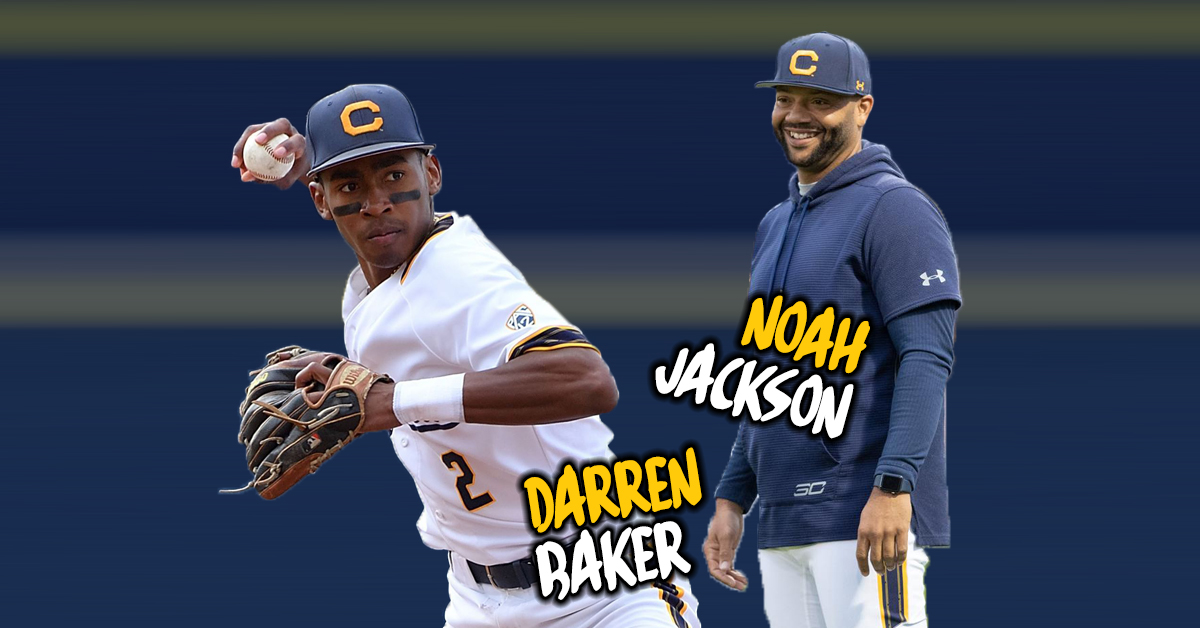 Darren Baker Carving His Own Path At Cal

Darren Baker distinctly remembers being benched at Jesuit High School. As a sophomore on the Sacramento powerhouse’s junior varsity baseball team, Baker found himself pushing to be something he wasn’t. The result was a stretch of poor play and a spot on the bench.

Five years later, Baker is a third-year starter at second base for California and free from the expectations that were held over his head for much of his amateur baseball career. And while he’s proudly the son of Dusty Baker – Houston Astros manager and longtime fixture in Major League Baseball – he’s not playing for anyone but himself.

“I’ve dealt with the pressure and expectations of others since the first day I stepped on a baseball field,” Baker said. “Playing high school ball in Sacramento, the same city my dad played in…it wasn’t the easiest. Once I realized that I don’t have to play for the approval of someone else, it lifted the monkey off my shoulder.”

Baker found a mentor in Cal third-year assistant coach [First Base Foundation – California Warriors Founder] Noah Jackson, Dusty’s godson…Baker knew his father played an important role in Jackson’s life and that he had the trust of his parents…“A lot in my life would be different right now without (Jackson),” Baker said. “The help he’s given me on and off the field these last three years…I can’t really put that kind of gratitude into words.”

Baker has learned to appreciate the moment at hand, letting those closest to him, his family and teammates, serve as constant reminders of why he loves the game of baseball. In addition to the guidance he receives from both his mother, Melissa – his “super hero” – and father, Baker found a mentor in Cal third-year assistant coach [First Base Foundation – California Warriors Founder] Noah Jackson, Dusty’s godson. Though they weren’t very close before crossing paths at Cal, Baker knew his father played an important role in Jackson’s life and that he had the trust of his parents.

“A lot in my life would be different right now without (Jackson),” Baker said. “The help he’s given me on and off the field these last three years…I can’t really put that kind of gratitude into words.”

A 2003 graduate of Cal, Jackson has been a steady hand for Baker, providing advice on how to maneuver life as a student-athlete at the top public university in the world.

“Darren’s always succeeded on the field, but the way he’s handled himself off of it is just as important,” Jackson said. “He’s creating his own path and legacy every day, and you can see how much it’s freed him as a person. In high school, he dealt with getting caught in the shadow of his dad. With today’s generation, if you think about it, most of his contemporaries don’t really know who Dusty Baker is. He can be his own person here at Cal.”

Months after signing his National Letter of Intent with Cal in November 2016, Baker caught a glimpse of his potential future when he was drafted out of Jesuit by the Washington Nationals. His selection in the Major League Baseball Draft was exciting, but also presented him with a fork in the road – enroll at Cal or begin his professional baseball career. There was never much debate for Baker, however.

“I pretty much knew I’d end up at Cal the whole time,” Baker reflected. “I wasn’t ready for pro ball at the time. I had never lived on my own, I didn’t have much experience swinging a wood bat. Most importantly, I stay true to my word as often as I can; I made a commitment to (former Cal head coach David) Esquer, Mike Neu and the staff at that time, and I stuck with it. I was generally excited to experience college baseball, too.”

Cal presented an opportunity for Baker to be comfortable in his own skin. Familiar faces were scattered throughout the Bears’ roster, including former Jesuit teammates Tanner Dodson and Jack Wolger.

“The way those older guys on the 2018 team welcomed me into the program, I don’t think they realize how much it meant to me to be treated as just another guy,” Baker said. “From the first day, no one treated me any different than the next, and that set the tone for me.”

The warm welcome Baker received as a freshman is now something he pays forward to his younger teammates. A usual face in the batting cage before practice starts, Baker is often joined by a pair of freshmen, Nathan Martorella and [California Warriors Alumn] Keshawn Ogans, who earned starting roles this spring.

“I take pride in letting the younger guys know I’m available to them, whether it’s to hang out or just talk,” Baker said. “I can relate to those guys, especially with them getting consistent playing time as freshmen. That jump from high school to college isn’t easy. If guys like Dodson and Wolger showed me the way, why can’t I help Martorella or Ogans?”

“Coming in as a freshman and not being too familiar with anyone was nerve-racking, but ‘DB’ took me in as one of his own quickly and established himself as one of my role models,” Ogans said. “Whenever I’ve struggled, he has words of encouragement to help me out of it.”

Baker’s time in Berkeley has already exceeded the expectations he arrived with in the fall of 2017. The Bears won 64 total games in his first two seasons while reaching the NCAA Tournament in 2019, and Baker has been heavily involved in the success, starting 110 of a possible 122 games since his freshman year.

While he’s a .290 career hitter and a dangerous base runner – 30 stolen bases in 34 attempts – Baker’s biggest strides on the field at Cal have been defensively. He was named to the 2019 Pac-12 All-Defensive Team and has committed only six errors in his last 64 games as the Bears’ everyday second baseman.

“There’s a night-and-day difference between the guy I am now compared to who originally came into the program,” Baker said. “I can still improve exponentially in so many different areas of the game, but I’ve made my biggest jump defensively. I wasn’t a bad fielder in high school, but I didn’t know the importance of the fundamentals like I do now. Those little things matter.”

Baker’s high baseball IQ and success at the collegiate level make him a likely prospect for the upcoming MLB Draft. Whether he decides to fulfill his dream of becoming a professional baseball player or hold off for another year, Baker intends to eventually do something his father never did – earn a college degree. Dusty was drafted out of Del Campo High School by the Atlanta Braves in 1967 and made his Major League debut just a year later.

“I really want to graduate,” said Baker, an American studies major. “At this point, I’m not sure when that might be, but it has become one of my biggest goals in life. To play pro baseball, it’s been a dream for as long as I can remember.
But that degree is something no one can take away from me.”

Conversations with his older sister, Natosha, and watching high-profile athletes put an emphasis on life after sports have reminded Baker what doors he can open with a degree from Cal in hand. He’s quick to reference his father’s work outside of baseball, too, listing Baker Family Wines and Baker Energy Team as examples of what he can strive toward.

For now, Baker’s focus is set on the present. Instead of the worries of yesterday or gazing too far into the future, he’s finding comfort being in being himself and meeting his own daily expectations.

“I’m taking it day by day and loving what I’ve been blessed with,” Baker said. “Next thing you know, the future will be here. It’ll take care of itself along the way.”