California Warriors Teams Impress At Final Tournaments Of The Summer 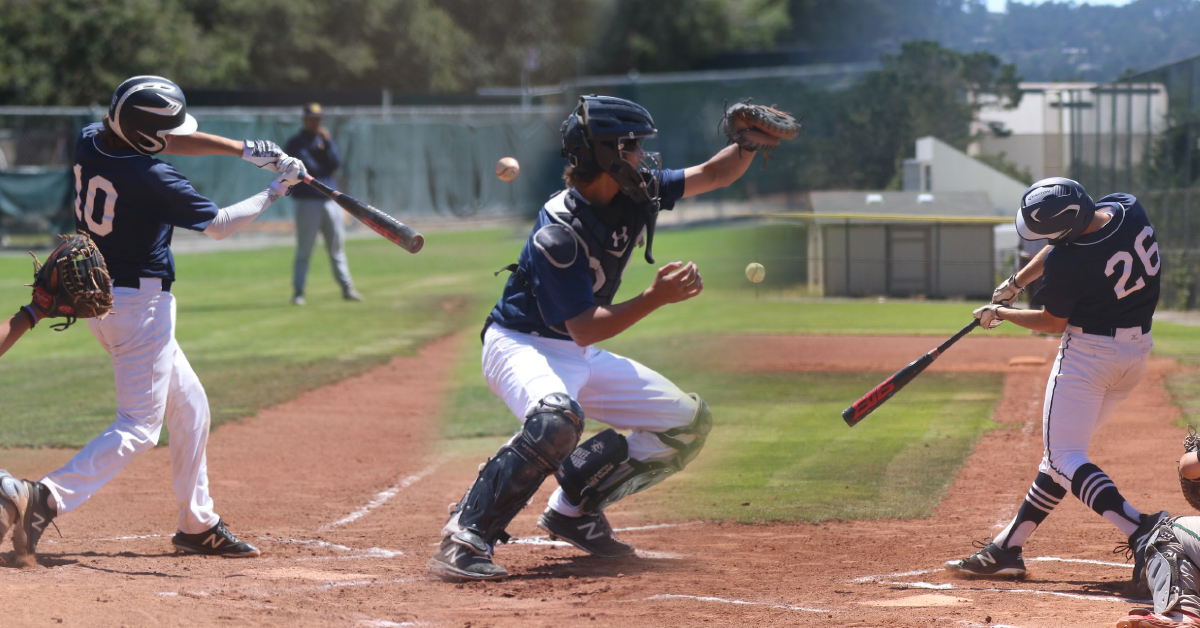 The California Warriors 2019 Team headed south to San Diego to wrap up our summer season at the Elite Talent Summer Series previously known as Phil Singer Summer series. We opened the tournament strong playing high-caliber baseball all week against some of the top competition. In game one, we beat the Quakes 3-2 behind strong pitching from Cooper Vasquez, Justin Bostian, and Tucker Bougie. Andrew Vaughn had two hits on the day, Jack Morken singled with two HBP, Keshawn Ogans, Jake Schmidt and Jack Morken turned three double plays. Vaughn hosed a runner at the plate from center field, and Eamonn Lance walked it off with a two-run double.

Following a hard-fought loss to San Diego Naturals, we turned it around and beat North Sound Baseball from Seattle 8-7 on a walk-off base on balls. We trailed 5-3 in fifth, and then tied it up on a two-strike, two-out double by Harry Mauterer. The next batter, his brother Vaughn, then blasted a home run, giving us a 7-5 lead. North Sound scored two to tie it in the top of the sixth (what would end up being the final inning due to time constraints), but then we loaded the bases on walks in the bottom half before Jake Schmidt drew the final walk to win it. Both Vaughn and Jacobsen came in to pitch in bases-loaded situations and worked out of jams.

Eamon Lance drove in two runs with a two-out single in a tough loss to San Diego Crush, but a dip in the Pacific, some food, and some rest gave a replenished Warriors team the energy it needed to collect two more victories to wrap up pool play. Following a commanding 8-0 victory in the morning, we beat the Sun Devils 13-0. Jesse Gassman started on the mound and threw four scoreless innings, after which his brother Jake threw an inning and Jake Schmidt closed it out. Andrew Frame blasted a hard-hit double and a single, Vaughn had a ground rule double, Keshawn drove in four RBI with a sac fly, a double, and a single, Tucker Bougie had two hits, and Will Jacobsen smashed a ball to left that bounced over the fielder’s head for a double. The California Warriors closed out pool play with a strong 4-2 record. Lots of fun! 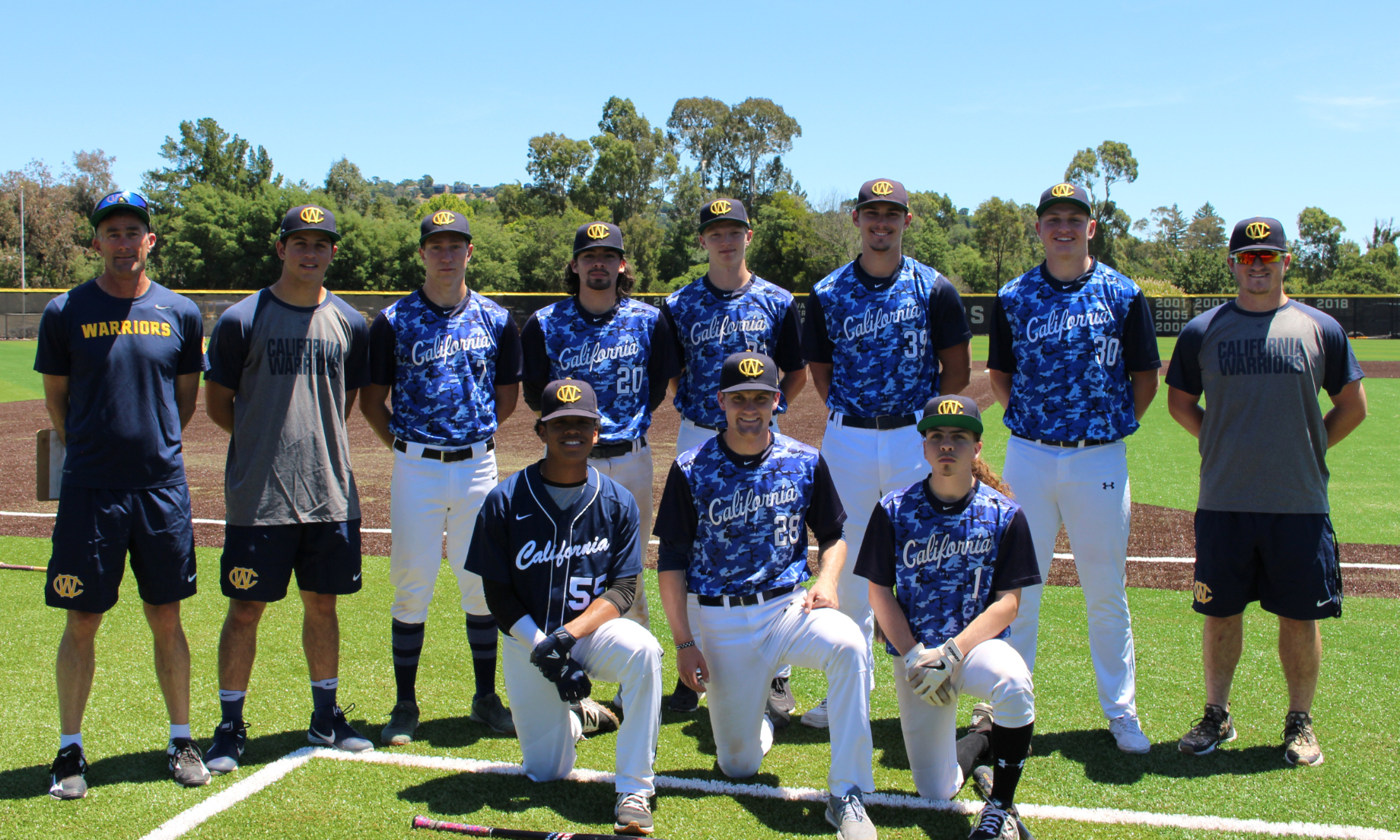 In the opening game of the playoffs, we lost a tough one to Pacific Baseball Academy who had excellent pitching. Harry Mauterer had two hits, and his aggressive lead at first drew a bad pickoff attempt from the pitcher, allowing Oliver (Oli) Sellman to score from third. Oli had reached via hit-by-pitch, stole second, and went to third on Harry’s hit. Cooper Vasquez started and threw five strong with eight strikeouts and was relieved by Vaughn Mauterer who pitched the final two innings and did not allow an earned run. The next morning we would face Seattle Select at 8:00 AM; Warrior Wednesday, now playing for our lives, soon as we lose we’re done.

Our matchup against Seattle Select was an exciting come-from-behind victory that saw a 9-5 final score. We were down 4-1 with two outs in the fourth when Jason Schmidt got hit by pitch, stole second and third, and scored on a Sellman single. Oli stole second and scored on a single from Harry Mauterer before Alex Hagen doubled to tie it 4-4. Andrew Vaughn drove Hagen home, then stole third and scored on an errant throw, making it 6-4 Warriors. Harry and Alex drove in another run each in the fifth. Additional highlights included a solo HR from Eamon Lance in the first and a double over the leftfielder’s head from Keshawn in the 6th. Trent Free started and pitched well, while Will Jacobsen came in to pitch with the bases loaded and got the team out of the jam. We then took home a 9-1 victory against Wolfpack Baseball in which Jesse Gassman pitched a complete game. Keshawn, Eamonn, and Alex Hagan all doubled, while Oli Sellman collected two hits and two RBI.

Unfortunately we came up short in our third game of the day, losing to NorCal 6-5. Will Jacobsen had three hits, including a 390’ triple. Eamon Lance BLASTED a home run over Poway’s football bleachers in the fifth to cut NorCal’s lead to 6-3. Jake Schmidt led off the sixth with a single, went to second on Alex Hagen’swalk, and came home on a wild pitch to make it 6-4 before Harry Mauterer singled Alex home to make the score 6-5. Nic Vamis started and pitched well, as did Jacobsen and Trent Free, both of whom were pitching for the second time that day.

We went 4-2 in pool play and 2-2 in elimination, making for a very respectable 6-4 overall record at the Elite Talent Summer Series. Thanks to all the players, families, and coaches for a great season, and for a great finale to the season – truly one of my favorite weeks of the year. Total upper!

The California Warriors 2020 Team had an impressive showing at the USABF World Series, posting a 7-2 record and falling just one win short of reaching the championship game. With a roster of 24 student athletes, Coach Stef effectively utilized every player in what was a complete team effort over the course of 9 games. 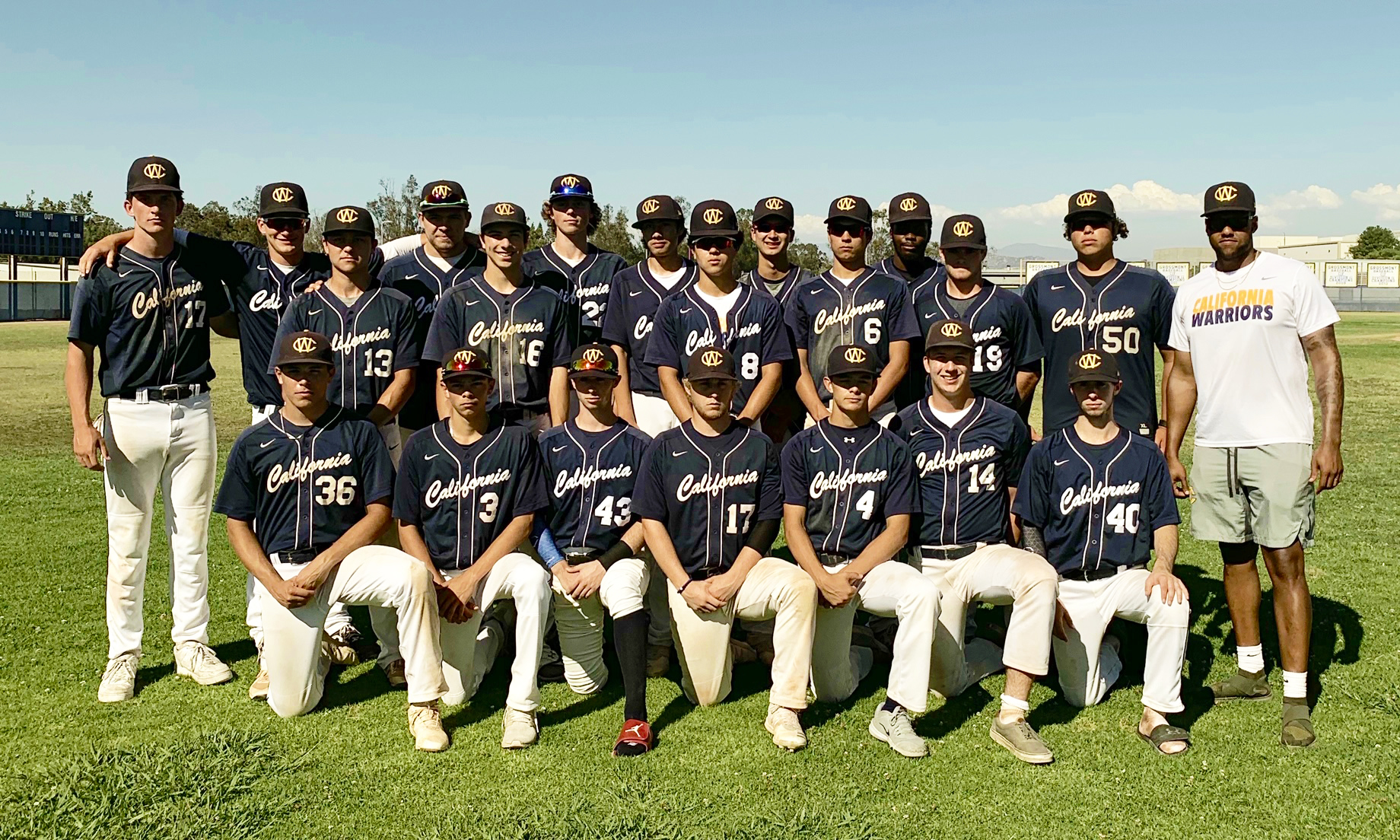 The California Warriors pitching staff really came through, led by Stephen Hartwell, who dominated on the mound. He gave up only 1 run combined in his two starts, which included both a 5-inning hitless outing and a complete game! Kyle Rubio was lights-out in his start, allowing 1 hit while striking out 7 over 5 innings. Tyler Reed was nothing short of impressive between 2 outings, allowing only 3 runs and striking out 6. Raudel Wilson had a strong outing as well, pitching 5 innings while allowing 2 runs and striking out 6 while Jake Gresham added a 6-inning shutout with 5 K’s. Yoshi Omi-Jarret, Issak Irimini-Kreft, Derrick Robinson Jr. and Frank Donnelly all had effective and efficient relief appearances, contributing to the team’s Wins.

To support strong defense and elite pitching, the CaliWarriors also put on a show with their bats, scoring 40 runs over the course of 9 games. Every position player recorded at least 2 hits, and Lucas Herrera, Trent Maher, Steven Elsner, Frank Donnelly led the team with 6 hits apiece. Derrick Robinson Jr. and Alex Hagen each had 4 hits of their own, blasting impressive ground rule doubles.

Congratulations to the California Warriors 2020 Team on a great summer and ending the season on a high note by leaving a lasting impression throughout the USABF tournament!

The USABF World Series in San Diego was a very great experience for the California Warriors 2021 Team who showed up ready to compete against some of the top talent in the region. We opened up the tournament with a win, after that we fought hard but fell short in the following three games. While hits were hard to come by our pitching staff gave consistently solid performances.

Sitting on a 1-3 record, the CaliWarriors 2021 Team still believed we had a chance of making playoffs, and we never gave up on ourselves. We went on to win our next 2 games, falling just short of making the playoffs. Throughout the tourney, Jacob Verweil provided a couple of standout pitching performances, while Mark Graham’s bat was a persistent threat in the heart of the lineup. Ryan Kopp hit a walkoff double that led us to a victory, Zach Coleman swung the stick well, and Parker Falzone played stellar defense while also swinging a hot bat.

The California Warriors 2021 Team players left it all on the field, and Coaches Burke and Smead are proud of the whole roster for a great summer of hard work, fun, and baseball! 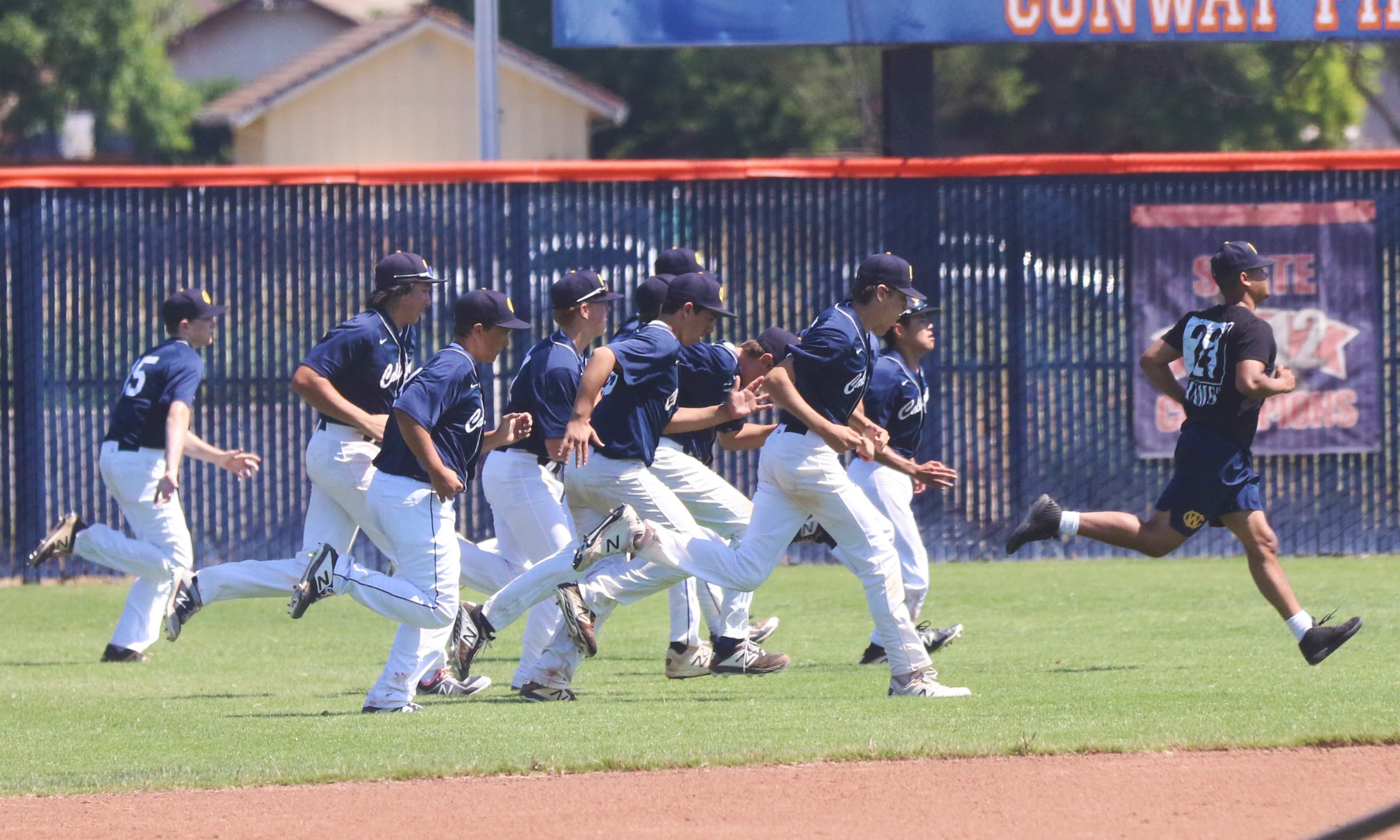 For their final Tournament of the summer, the combined California Warriors 2022 Team and Development Team took the field at Folsom Lake College to compete in the V Tool Rising Stars Showcase Tournament. The CaliWarriors dropped the first two games to the Chico Aces and the River Park Eagles. However, the second day of the tournament would offer more success. On day two, the CaliWarriors took home a win against the Chico Aces and lost the second game against Trosky Baseball. Wyatt Davis had an outstanding day both as a pitcher and as the leadoff hitter. He literally propelled the CaliWarriors to victory. The CaliWarriors made the playoff round as the 4th seed, but were not able to go any further, losing what was an exciting final game of the tournament on Sunday. Coach Brown and Coach Merriwether were able to get everyone some time on the mound and in the box, and join Coach Allen in congratulating all the players on a great season.